Wheels Up: Sky Jinks in the Jet Age is an unexpected treat: unexpected because of its humor. But when you look at the cover art (which shows a pilot poking up through a little hole in his aircraft's roof to wave at the camera) and read the book's subtitle, these are definitely clues that the contents of Wheels Up holds more than just a story of flying big planes.

Oh, this piece is there, of course: but the purpose here isn't to provide a serious account of exploits and air encounters: it's to chronicle the true-life antics of a pilot who is an ex-boxer, an air force pilot, and more. So expect a blend of autobiography along with hearty accounts of mishaps, ironies, and close encounters with strange passengers that included his 23-year-old daughter who, ironically, harbors an intense fear of flying.

Captain Taylor’s ex-wife, as well as his daughter, experienced a condition the author calls ‘FREUD’ (Flying Represents Early Ugly Death). You’d think an experienced pilot could allay this fear. But no: to some, flying is a dangerous endeavor. And the difference between irrational fear and ordinary apprehension creates a fine line between astute worry and sheer panic.

In the course of exploring his family's fears, Captain Taylor provides much insight into phobias and the real dangers of airplane operations; so the story becomes more than a narrative about one woman's fear but documents the very real phenomenon of 'fear of flying' and the realities involved in adapting to plane flight.

Because this is an autobiography, there are digressions, so readers seeking JUST airplane-oriented tales will find some chapters document other aspects of Taylor's life, such as hunting with a big-egoed but inexperienced hunter, or shooting out the tires of a garbage-dumper who invades his property.

The sky jinks are only a part of a bigger picture which translates to life encounters that hold more than a touch of irony and lessons to be learned. It's a pleasure, however, to see an autobiography that pairs comic relief (as in the hilarious story of Captain French Bread and his flight attendant) with serious reflection, adding a dose of pilot's experiences to supplement other outrageous pranks and fun moments: "Bob Norris did not get his reputation by not finalizing his jokes. He had left the airplane soon after we arrived at the gate and went to operations to secure paper with an official letterhead. When Pidd arrived at the bulletin board there was the phony safety memo about the fire hazard from faulty coffee makers."

It's this attention to humor and lessons learned from flying and life that makes Wheels Up an uplifting, memorable and fun read recommended for airplane enthusiasts and general autobiography readers alike. 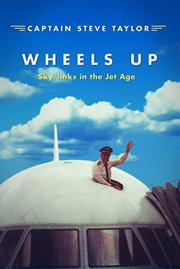 Sky Jinks in the Jet Age
by Steve Taylor
GET WEEKLY BOOK RECOMMENDATIONS:

A memoir about what happens to a hyperactive kid when he grows up and becomes an airline pilot.
Debut memoirist Taylor grew up in South Carolina, matriculated at The Citadel, flew in Vietnam, and then spent a long, very satisfying career as a pilot with Delta Airlines. He didn’t achieve his dream of being a fighter pilot (for one thing, he had a very dicey stomach), but his stint in Southeast Asia piloting huge C-130 cargo planes prepared him well to fly Delta’s big jets. The book’s early chapters are pretty brutal, as upperclassmen at The Citadel screamed at him and tormented him, and then instructors in flight school did the same. But Taylor was spunky, giving as good as he got, and he loved to play practical jokes and pull pranks, such as when he tricked flight attendants into thinking a weather balloon was a UFO. Some of these pranks are funny, butothers are somewhat labored in the telling. Readers have a front-row seat during harrowing landings in Vietnam, close calls flying for Delta, and other misadventures. When Taylor writes of retiring at the age of 60, saying, despite the parting festivities, that it was “one of the saddest days of my life,” readers will believe him. There are many more stories here; for example, the author sailed solo from Bermuda to North Carolina. (Taylor holds a U.S. Coast Guard captain’s license and, alone and becalmed at sea, gives his inner poet free rein.) He also writes of hunting turkey and deer; raising his four kids as a single dad; his late, touching tribute to a man who taught him how to temper steel, and much more. Readers will overlook the frat-boy quality of the early high jinks, because when push came to shove, Taylor proved to be a sensitive, responsible grown-up. They will come to like Capt. Taylor very much, which is more than half the charm of a good memoir and a sign of a good memoirist. The book also includes photographs by the author.
A good read, of special interest to those who love flying.
Pub Date: May 16th, 2014
ISBN: 978-0-9914911-0-0
Page count: 211pp
Publisher: Joggling Board Press
Program: Kirkus Indie
Review Posted Online: July 8th, 2014
8 Comments

SKY JINKS SECOND BLOG: This is from the opening of a "WHEELS UP" story that almost landed me in jail.

Quincy Fowler was a violent man. At least he had a violent reputation, and he seemed to cherish that reputation. His foul-mouthed wife told him she was leaving and wanted a divorce. He made it known that anybody assisting her in this endeavor would incur the full measure of his wrath.

Sometime during the divorce proceedings a courier arrived with papers for Quincy. The house, which had never been painted, was landscaped with a dirt yard and several old pieces of machinery. Quincy sat on his front porch wearing overalls and no shirt, his ample belly spilling over the sides of the bib. Chickens pecked around the front steps as the courier asked if he was Mr. Fowler. Quincy spat a stream of tobacco juice, glared menacingly at the messenger and took the delivery. As he looked at the information, one of his chickens jumped up on the end of the porch. Without getting out of his chair, Quincy retrieved his 12-gage shotgun from inside the front door. Given the closeness of the wall and ceiling the blast was deafening. Chicken blood and feathers exploded all over one end of the porch and dirt yard.

“I told them chickens not to get on my porch,” Quincy said.

The terrified courier left. Quicker than you could say Quincy Fowler, word spread around the Montgomery County legal community, and Mrs. Fowler could not find a lawyer to represent her in her divorce.

Cut ’N Shoot, Texas, is a small town in Montgomery County, about six miles outside of Conroe. It did not get its name from cutting cattle and driving them into a chute. The name was actually derived in 1912 when a confrontation between two church factions frightened a small boy. Evidently, to escape the conflict, he said he would cut around the corner and shoot through the bushes. During the East Texas oil boom of the 20s and 30s, the mixture of oilfield roughnecks and cowboys did provoke some cutting and shooting. Through the years the more violent meaning of the name endured. Quincy Fowler lived in Cut ’N Shoot.

This will be my first post to Sky Jinks Blog. I incourage readers to comment with their airline jokes and stories. This first story comes from the opening paragraph of "Wheels Up."

Delta was taxiing out for takeoff. United had just landed and was

on her way in. As they passed on the taxiway, Delta Captain McSwine

phone and addressed the passengers. "Ladies and Gentlemen, off

to your left you will see the friendly skies of united." They all looked

in time to see the united airplane slowly taxi by while its captain, in

Come visit the Wheels Up exhibit at the Decatur book festival Aug 30-31. This is the largest indenpendent book festival in the U.S. with over 500 exhibits.

Available in print and